The Harlot was here!

Actually, the fun actually couple days ahead of her arrival. Blue Moon Fiber sponsored an "Inexplicable Knitting Behavior Scavenger Hunt", complete with a long list of Portland related sights for "Socketeers" to take their own sock-in-progress for pictures. The idea was to gain points and win prizes which were to be awarded at the Harlot's appearance. I had to work that day, so I didn't stand a snowball's chance of getting enough points for the big prizes, but I did manage to snag a couple of pictures worth sharing.

My boss, to whom I had to request that he hold my sock three times before he agreed. Not because he's dim or anything, he just couldn't understand why I would knit a sock, or ask him to hold it, or take a picture of it. I think he only agreed because it seemed harmless at the time. Don't anybody tell him about our plans, and maps, and strategies to take over the world, OK?

And his boss, who never really understood why someone shoved this in his hand and then took a picture. Immediately after I snapped the pics, each one of them said, "This isn't going to show up on the Internet someplace, is it?" After all, they ARE attorneys, you know. So let's just keep this our little secret, OK?

As soon as I could escape the office, I made my way to MAX and the World Forestry Center and found my peeps. In the lobby, Blue Moon was selling all the Harlot's books, as well as skeins of yarn they dyed especially for the event, with all the proceeds going to the Harlot's favorite charity, Doctors Without Borders. If you didn't make the event, or did and want another skein of yarn, Blue Moon said it would be available on their site in a few days.

Cindy, Kathleen, Kerin, and Monica had arrived early and snagged a bunch of premo seats for the PDXKB crowd: We were there 2 hours early, so we talked about our knitting projects. That's Roxie down there on the right, wearing her "Lizard Queen" hat. It's got everything: pink, sparkly, flowers, lace, beads, and dangles. What else could you possibly add? I was surprised to see Judy there; especially since she was supposed to be in a conference back east. And look! She even brought her socks-in-progress!

Man, the crowd was huge! And loud! Just listen:

Then, we started to look around at some of the other fantastic knitted things. There was this great cabled ruana: The picture really doesn't do this justice; it was a beautiful berry red and the cables were perfection!

This poor guy must have been dragged here by his lady friend. He wore this great hat, but spent the whole time reading his e-reader. I would be surprised if she didn't go home with whiplash, though from all the knit ogling she was doing. Badger came walking by the PDXKB group and garnered not only some cat calls, but had the possibility of picking up some extra money as $ bills were being waved at him as he turned the corner. He said the sweater is for his dad, but he hasn't gifted it yet, so he swore us to secrecy. Yes, I took pictures of the Harlot, and of Duffy's "bring the house down" serenade. But none of the shots came out. Because I had the flash on the wrong setting. Clear evidence that my camera is are afflicted with the dread disease: PICNIC. "Problem In Chair, Not In Camera." So, wander on over to some of the PDXKB gang's blogs and get good pics and some videos.

I did eventually get it working again, just in time for Stitch Jones to make it to the head of the line: That is one happy PDXKBer!

She presented the Harlot with a special skein of her yarn, dyed especially for her in Harlot-y colors. It was about this time that the PDXKB group "thread jacked" the line for signatures. I think we scared the Harlot a little. Thankfully, we'd all bought pre-signed books or I think she would've made a break for the door. As it was, we got her to pose with all of us, including Judy, and her traveling sock. Unfortunately, none of us took the picture. I hope it shows up on her blog! And I hope she had a much fun as we
did!

Edited later to add: If you really want to see what scared the Harlot, then go here and see for yourself.
at 8:13 PM

Unfortunately, Blogger will not let me track back to you, so if you would like an answer, please include your email address at the bottom of your comment. 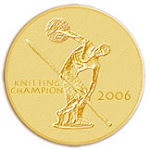